Music has always been an integral part of our family, woven into our very genes. My granddad and his brothers were known as the Gunn Gospel Quartet. Every one of my siblings and I sang in choirs and still sing. My mom was very proficient at playing the piano. My siblings and I all learned to play the piano, in varying degrees. My oldest brother never learned to read music but could play a piece completely by ear. My sister still actively enjoys playing her piano.

My mom’s 1902 grand piano proudly sits in my living room. I can sit at the piano bench quite well. I can even curve my fingers properly on the keyboard, but play well I cannot. Because I was truly not good, I was not inspired to continue playing.  #saysalladultswhotookpianolessons Now when I stroke the piano keys, the cats run and the dog looks at me like I am sick. Otherwise, the piano lid makes a great place to display family photos.

Spotify and Pandora playlists include classical and modern piano recordings of which I greatly admire. Music Appreciation class was not lost on me. I appreciate how easy they make playing a difficult piece sound. We grew up with family favorites. When Claire de Lune begins, all work ceases as I close my eyes and hear my mom’s favorite piece transpose even the most chaotic day into calm. 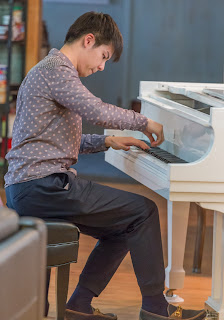 Imagine then my thrill at being invited to my neighbor’s home for a private piano concert. The audience was mesmerized as Han Chen, now competing in The Van Cliburn International Piano Competition, played with immense emotion and passionate depth.

Moving between Rachmaninoff to Haydn is like moving from Lynyrd Skynyrd to James Taylor but Han made it look effortless and flawless. As he stroked the keys in rapid succession, he drew us in to the notes and phrases of the composition itself. Captivated and hypnotized we listened. Full but wanting more, we were heartbroken when the last note was played.

The Van Cliburn competition brings the world’s best rising stars to Fort Worth. The world. Han is from Taiwan, but others are from Russia, South Korea, Germany, Japan, Great Britain, Romania, Austria, Croatia, Poland, Canada, China, and yes, the United States. Though a predominantly male field, there are nine females competing this year. Out of the 290 applications the Van Cliburn received this year, 146 were invited to audition live in seven world locations: London, Hannover, Budapest, Moscow, Seoul, New York, and Fort Worth. 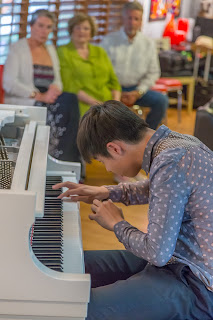 From the audition, 30 were chosen to compete in the Van Cliburn International Piano Competition’s Preliminary Round in Fort Worth. In the first round, the pianists chose their compositions to play plus a Van Cliburn Competition commissioned piece they did see nor hear until February. They have up to 45 minutes to perform these pieces.

In the next round, the Quarterfinals, 20 competitors are play pieces, again of their choosing, for up to 45 minutes. The Semifinal Round is 12 competitors that will perform in two phases. The first phase is a recital of compositions chosen by the pianist for up to 60 minutes. The second phase is a Mozart piano concerto with the Fort Worth Symphony Orchestra.

The Final Round is 6 competitors in two phases. The first phase is a quintet with the Brentano String Quartet and the pianists chose from a list provided by the Van Cliburn Competition. The second phase is a concerto with the Fort Worth Symphony Orchestra, where the pianists may choose any work scored for piano and symphony, but must be approved by the Van Cliburn Competition.

The competitors choose, learn, and perfect 16 pieces that can be played with passion, sensation and eloquence, like no other competitors. Han keeps a journal of his practice on each piece, and could count the hours he spent learning the commissioned piece in three months.

Beginning piano lessons at age 4 in Taiwan, Han has been in the United States for seven years studying at The Julliard in New York City and now at the New England Conservatory. It is an understatement to say piano is his life.

Like any fine-tuned athlete, Han’s days are filled with perfecting his trade. He is meticulous in the evaluation of his playing. He is precise and exacting in how he approaches learning a composition.

He lives with music playing in his head 24/7 – melody sequencing, passionate phrasing, and rapid scaling. I asked him what he thought about before he went to sleep at night, and he replied, “Whatever I was practicing before I went to bed.” And, he wakes up thinking about the same. 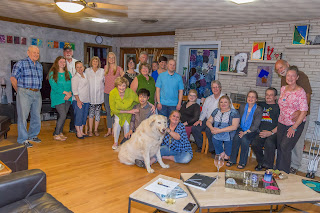 Han’s favorite composition is Liszt’s Sonata in B Minor, composed in 1849 and completed in 1853. It takes 30 minutes to perform and is of extreme difficulty. That is why he loves it – it challenges him and provides a great variety in a single composition. It has four movements with a common melody. He is performing this at 5:15pm today during the Quarterfinal Competitions, which can be viewed online.

One evening, we talked about the comparisons between a pianist and ice skater. It was an intriguing comparison. As the ice skater builds their program to draw the audience in to their skating, so does the pianist. As the ice skater must tackle difficult programs to demonstrate their skill and proficiency, so must the pianist. Both perform in front of audiences with huge potential distractions – a cough, a physical movement, a cell phone, etc. Both must stay in shape, eat right, rest well, and be mentally tough.

Continuing our ice skating comparison, I asked him if certain piano compositions were graded higher due to their complexity, such as Liszt’s Sonata in B Minor, which would give the pianist a higher score. Han explained that the pieces were not judged on their complexity but that the judges want to see the greatest capability of every piece played, to the fullest potential of that particular composition, regardless of the complexity. 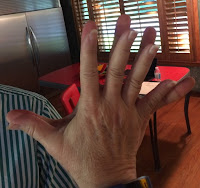 What is different between playing in an 8’ ceiling home versus the Bass Hall? It takes longer for sound to reach the ceiling then travel to the back of the room. Where it feels like he is playing slower, he said, he is actually playing faster because it takes longer for the sound to go up and out. He said all pianists learn to adjust how they are playing for this phenomenon.

One of my excuses for not continuing to play the piano was because of my short fingers. I was shamed when comparing the size of our hands, for Han’s fingers were not that much longer but the stretch of his hands was much broader. His love of the piano, plus passion, determination and perseverance has brought him to such a proficiency to be invited to compete. Han Chen is definitely my Audience Choice – he was a good sport to answer all my questions. 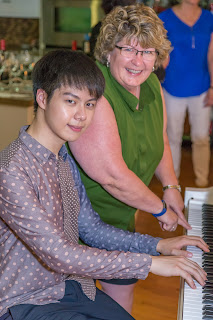 Speaking with Han was truly a pleasure. Listening to Han play the piano? My fingers are curved on my computer keyboard waiting for the appropriate heartfelt response to type out. Listening to Han stunned my ears to a higher existence. He is amazingly gifted. And, I am at a loss of words to describe the depth of joy I felt in listening to him.  I do not doubt he is quickly becoming a world renowned pianist.

A great thanks to Cliburn.org who not only hosts this competition annually but also broadcasts the competition live. It has been a pleasure to listen and watch.  And, be sure to vote for Han Chen as the Audience Favorite!