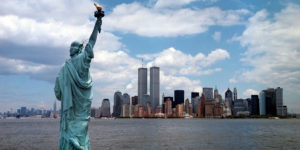 September 11.  We can all touch the emotions of how we felt watching terrorist attacks unfold.  Some of you may have lost loved ones, some may have taken a long time to feel “safe” again, and some may have experienced a crisis as a result.  As someone who flies a lot, and whose airline of choice was involved in those attacks, it changed me in ways I have never shared.

On that tragic day, the terrorists used four American planes (two American Airlines and two United Airlines) to target three different locations: the World Trade Center in New York, the Pentagon in Washington DC,  and an unknown destination. The third target was never hit and remains unknown, as the plane crashed in a field in Somerset County, PA. Not only were those on all the flights killed, but thousands on the ground, as well.  So many precious lives lost that day.

There have been many times since that fateful day that I have stopped and thought of all the lives lost.

The passengers, the flight staff, the pilots and those employees, fire-fighters, police on the ground. All of their days began no different than mine. They woke up, hugged their loved-ones goodbye, drank a cup of coffee and headed to the airport or work.  Old, young, tourists and businesswomen and men – the crisis touched all walks of life.

The days that followed deepened the already cratered world we lived in as our hearts broke hearing the thousands of victim stories. Flying anywhere was intense. Passengers boarded the planes as if we were at a funeral. Everyone was looking at everyone else suspiciously at the gates. Long lines at makeshift security attempts only added to the visual reminders and frustrations of our American tragedy.

It was my country that had been attacked but it was also my airline that was attacked–my people, my family. I considered  American Airlines an extension of my business, getting me where I needed to go to be successful.  I had been an American Advantage frequent flyer since 1982. They were my business support staff. They were my friends.  These thoughts kept going through my mind the days and weeks after the tragedy of September 11th. They were my family.

A little over a month after the attack, I flew to California.

All the news of 9/11 showed no signs of slowing as the heartbreaking stories continued. It was prior to this flight that I began to recognize everyone’s overwhelming sadness. First, we were in shock, then in deep sadness. My friends, my colleagues, my support staff, my family carried on their duties, but their broken hearts were still showing. Perhaps my own numbness had begun to wear off, and I was able to see past my hurt and fear. Finally, it clicked. We as a nation were collectively mourning.

Everyone needed a massive dose of encouragement.

As I walked towards my DFW gate, I saw two flight attendants and two gate agents talking quietly among themselves at the gate counter. I had an undeniable compulsion to reach out and connect with them. So, as I gently touched two of their arms, I said, “I need to tell you how sorry I am for your loss.  You are my family, and I am so sorry.”  They looked shocked as tears welled up in all their eyes.  One of them stammered, “No one has said that to us. Thank you.”

After my flight was called, I approached the ramp and saw the same gate agents I talked to were taking the tickets. As I handed over my ticket, the agent pulled me into a warm hug, thanking me for my words.  I was still stunned it had that much effect.  The need was greater than I thought.  If they responded that way, then the rest of the flight staff needed to be encouraged, as well.

As we were taking our seats, the Canadian woman next to me asked about the obviously emotional hug I received. I explained how we got to that moment and saw tears in her eyes as well.

Then the most bizarre, yet healing idea occurred to me.  I contemplated it for a few moments. Again, I felt compelled to take action. The idea was definitely bold and unconventional. Still, it seemed like the right thing to do.

Putting pride aside, we made it an international collaboration, my Canadian row companion and I. Sharing my idea with her, she readily agreed. 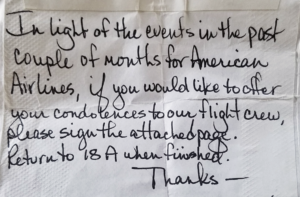 So, we put the plan in motion.

I tore a page from my book, Getting The Most Out Of QuickBooks, and scratched out the title at the top and bottom of the page. This moment needed to be about the flight staff, not me or my book.  At the top of the page, I wrote, “We, the passengers of Flight # ___, want to offer our sincerest condolences to our family and friends at American Airlines.  We are truly sorry for your loss.”

Then, I took the barf bag, tore it in half, and attached the clips to the top half of the page.  On the bag I wrote, “In light of the events in the past couple of months for American Airlines, if you would like to offer your condolences to our flight crew, please sign the attached page. Return to 18A when finished. Thanks.”

My Canadian seatmate and I then signed in random spots on the page for anonymity, attached a pen to the top, took a breath for courage and tapped the shoulder in front of me. The shoulder belonged to a burly man who looked upset that I had disturbed his space. Regardless, I passed him the note. As he read it, his surly face melted and the defensive tension dropped from his shoulders. The man next to him was leaning over to read the note along with him. He turned back to us and flashed an appreciative smile.

To my relief and joy, they both signed and passed the note up to the next row. I watched the same scene repeated over and over.  A questioning glance after being tapped, then a sigh, a thoughtful reflection, tension melting, writing and passing the note along.

What happened next was memorable.

What started out as a plane full of strangers absorbed in their own worlds soon became an aircraft full of friends, talking and sharing.  The flight was filled with the warmth of human connection. There were undoubtedly a few tears,  some unexpected laughs, and numerous hugs.  It was truly amazing to watch unfold.

A bigger picture unfolded before me. It wasn’t just the flight crew that needed encouragement, but the passengers as well.

Turns out, the man in front of me was returning home after being in search and rescue at ground zero.  I didn’t even consider the encouragement would spill over to the passengers, but it did.

As I was thinking about why it’s so difficult to step outside of our box, a flight attendant approached my seat. She had a quizzical look on her face, holding the note and attachment.  She said she was supposed to return them to me. Much to her dismay, I took the note and told her to come back in ten minutes.  She returned to the first class galley where all the flight attendants had gathered to chat and speculate.

My surrounding seat companions listened as I quietly read some of the messages written on the note. Some simply signed their names, while others wrote intimate personal notes. Others wrote of their lost loved ones. A few had even been at ground zero searching for survivors/remains. I was in awe at the written responses, and very aware of the magnitude of potential healing.

As we all gave a nod that it was time to alert the flight attendant, I pressed the call button.

Promptly, the flight attendant returned, then scurried to the front to share the note with her gathered colleagues.  All the passengers knew what was happening and we were all watching the flight staff’s faces as they read the messages. Their tension relaxed, tears fell, and, I believe, love filled their hearts.

There were many tears shed that flight. Healing tears.

My healing came from watching everyone else, observing their need and their response.  What was first thought to be healing for a few, ended up being healing for a plane full of people.  At least that’s what I thought as we landed.

A few years later, I flew in and out of New York City for the first time since September 11th.

On my return flight, I was chatting with two of the flight attendants while stretching my legs.  Solemnly, they shared their stories of the loss of their friends. I saw the heartache return to their faces.

Mentioning I had been on a plane where a note had been passed, one flight attendant’s eyes lit up in recognition of the story.  She shared with me that the note had circulated through American Airlines and the contents read by many flight staff.  She even thought it had made the flight attendant’s magazine.

That was not my intent but what began as a small act of encouragement, provided an even greater magnitude of healing than I ever imagined.

I, not unlike the rest of our nation, had been praying that God would heal our nation.  It always seemed like such a surreal request but with recognition of the overwhelming need.  Yet, I learned something not necessarily new but much deeper than I have ever experienced before.

Healing our nation begins with us, we the people.

Now, 17 years later, I am finally sharing my 9/11 story. Every year since then, I have contemplated sharing it, but never could put pen to paper. To my heart, it is a deeply personal story and one that was difficult to write.

I have a flight this month on September 12th. As I prepare for the trip, I have been thinking about those events 17 years ago and how my flying habits have changed since then.

First, I am still very fiercely loyal to American Airlines, regardless of the changes that have happened since.  Yes, they aren’t perfect, but there are frustrations to be had with every airline.  Yes, they are a different airline now than they were then. Who is the same now that they were then? And, yes, I still consider them my family.

Second, I am always, always, always friendly to the gate attendants, flight attendants, pilots – everyone associated with my flights. They lost friends that day and the struggle with wanting to do their jobs in the weeks that followed was insurmountable for some.  If they look like they are having a bad day, I smile, thank them for their work and relay how much I appreciate them. As I found out from the 9/11 note, a little encouragement goes a long way.  I still have the “barf” bag note to remind me to seek to be a source of encouragement.

Third, I hug goodbye.  I am a hugger for which I will not apologize. Touch in itself is healing to some.

September 11th broke our hearts in ways we never imagined.  Seventeen years later, I still can’t wrap my head around the events.

We will never forget because it has significantly changed us. Decide you are going to be an encourager today. It does not have to be something as dramatic as this story. I certainly did not believe the small offering of encouragement would end up meaning so much. Start with a smile and a word of appreciation.

We all hold healing power in our words and actions. Let them encourage someone today.