These past few months I have cleaned up four of the worst QuickBooks data files I have seen in 25 years. I have been stunned at the chart of accounts design, incorrect balances, misplaced transactions and the inability for the practice owner to get accurate financial reports in a timely manner, if ever.
Seriously. These QuickBooks were bad.
More disturbing was that these were files the CPA was also involved in. Let me give you a brief overview.
Practice #1 – Doctor owner decided he wanted to do QuickBooks himself because the CPA was taking too long to produce reports he needed to make some financial decisions. Doctor had given the CPA access to the bank and credit cards and information regarding the transactions. CPA was supposedly updating that information in the QuickBooks data file the CPA office retained.
Doctor called the CPA requesting a copy of the QuickBooks file so he could begin doing QuickBooks in house. After a variety of excuses from the CPA, the CPA finally told the doctor that the practice’s data file had become corrupted when the CPAs computer crashed and that Intuit was rebuilding the file. There was no back-up. No backup. This CPA should have been reported to the state board of public accountancy.
I have serious doubts this CPA was telling the truth: 1. What CPA does not do backups. He also stated he had no other backups. 2. He said he was using a Mac and I know of no CPA that use a Mac system for their clients. I even asked my CPA friends (yes, I have them) if they knew of anyone who did taxes on a Mac. No, because all the tax filing software I know is PC based. As it stands, since the doctor has no backup of prior years data in case of an audit, he is rebuilding 2019 – 2021 in a new data file.
Practice #2 – Doctor owner decided she wanted to bring QuickBooks in-house and off of QuickBooks Online. She was working with a consultant and they had been unable to get accurate reports for several months. The CPA had talked them into QuickBooks Online so that they could both have access.
After I received the converted Online QuickBooks data file for the Extreme Makeover, I noticed that many of the balances were not current, being several years old. There were many duplicate accounts. It was sloppy. Transactions were in random accounts. The CPA was creating the payroll, yet it was being manually entered by the CPA.
After asking the practice owner many questions, we decided that the CPA was keeping a completely separate financial data file. They were only using QuickBooks Online to get access to the transactions that were being manually entered by the practice. Paying for QuickBooks Online and the practice owner did not have access to all their financial data? They could have used Google Sheets to share the transaction information instead of paying $75 monthly for a glorified checkbook.
After many discussions, it was revealed that the CPA was using a proprietary accounting software that would not convert to QuickBooks. What the practice thought they had been paying for all those years was not the accounting data they had access to. There were “two sets of books” when the doctor owner thought there was only the one.
Practice #3 – Also a prior QuickBooks Online customer whose CPA talked them into it, and it was used similarly to Practice #2. This one was the worst of the four. No balances were correct, accounting numbers were used, nothing had been reconciled, multiple duplicate accounts, which was probably the result of accounting lingo being used.
When the accounts are illogical, it makes designating a transaction to an account even harder. And being forced to use accounting numbers is completely unnecessary and a power play. No accounting numbers or lingo are needed as the doctor owner is not an accountant.
In my notes on this account, I wrote, “Exactly what has the CPA been doing for $750 per month?” After the QuickBooks Extreme Makeover, she was thrilled with her reports and how much easier it was to understand.
Practice #4 – Sometimes CPAs present a superior air, almost bullying their clients. I have heard of this quite a bit in my 24 years of working with dental practices. This practice’s CPA was quite successful in making the practice owner afraid to ask for the QuickBooks file so she could do the work quicker. The email exchange between them was amazing. Seriously, I was stunned at the attitude taken of someone who has been paid quite lucratively every month. They were bullying, disrespectful, and entirely demeaning in their conversation. It was disheartening that this CPA had become quite good over the years at the fear tactics. So good, they tried again. But this time it did not work. Knowledge is power.
I walk beside my clients in whatever capacity they need. This doctor owner is taking control of her practice. Over the years, she had believed the lies told to her by the CPA and is now gaining control of her finances, easily accessing reports. It is a learning process but she is doing it!
Also interesting is that this QuickBooks file had been organized in a logical manner prior to the current CPA. Not my Practice Management Chart of Accounts, but close. Yet all those accounts had been inactivated and the ineffective chart of accounts created in its place, with accounting numbers and accounting lingo. There were a staggering 430+ accounts in the chart of accounts. 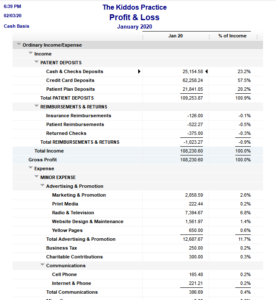 What does this mean?
In Money In, Money Out, I wrote a chapter on working with your CPA. Obviously, I more often see QuickBooks data files that are problematic from understanding the reports point or an embezzlement point.
But the CPAs should not be enabling any accounting inaccuracies to continue. Their business should be client focused, supporting the practice’s business success. They should answer questions the practice owner does not know to ask. They should not make the accounts payable portion of your accounting a nightmare or make you afraid to use QuickBooks by using threatening or demeaning language.
Your CPA should have the same financial information you have. There should be no need for two sets of books, which ALWAYS means one of those sets of books is more accurate than the other. The practice should have one QuickBooks data file, which makes changing accountants much easier when necessary.
A practice uses dual accounting software – the practice management software for accounts receivable and QuickBooks for accounts payable. There are TWO accounting software, not one. QuickBooks is much easier to understand than the practice software and contains far less information. 85% of the accounting is done in the practice software. 15% of it is done in QuickBooks. The only thing that needs to go into QuickBooks from the practice software is the deposits. Nothing else. It is not rocket science. It is easy.
There is much more to all four of these stories but I will stop in order to not rant. I am extremely protective of your practices and am so disappointed in the CPAs that take advantage of you. Every year, I hear horror stories regarding those CPAs that have taken advantage of the doctor owners, charging big bucks and leaving inaccurate reports in the process. Two hours a week is all it takes to take charge.
Let me clarify. There are some amazing CPAs in the United States. These are four examples of the kind of CPAs you do not want to be using. How do you spot check your CPA?
Each CPA except one said “I can help you with that” when all along they should have been doing it in the first place. Is it time for you to take charge of your own financial information? Your dental degree and practice software are far more difficult than using the 15% of QuickBooks in your practice.
The QuickBooks Extreme Makeover creates a data file that is easy to understand, reallocates to the appropriate accounts, and looks for problematic areas. It is designed in such a way that you can download transactions from your bank and credit cards, create payroll and run reports in about 2 hours a week average. Two hours. Seriously. And, it is easy to oversee to protect the practice from embezzlement.
I absolutely love teaching the doctor owners how to review their reports. If I can help you, please call.
Want more on this topic? Here is a podcast with Linda Valencia and Jody Catalanello from Mosaic Management Group.